As an iOS developer at Dutyfarm I developed this mobile version of the game “4 in a row” for iOS.

With logic and concentration you have to bring four chips of the same color in a row, the same objective pursued by the enemy.

In addition to classic design and thrilling animations the game offers the option between real playing against real people from around the world and computer opponents. The difficulty of the computer enemy adjusts bases on the user’s skill level. 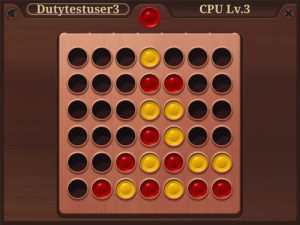 Whether on the iPad or iPhone, at home or on the road, as multi or single player, this classic game in a new look is a long runner.